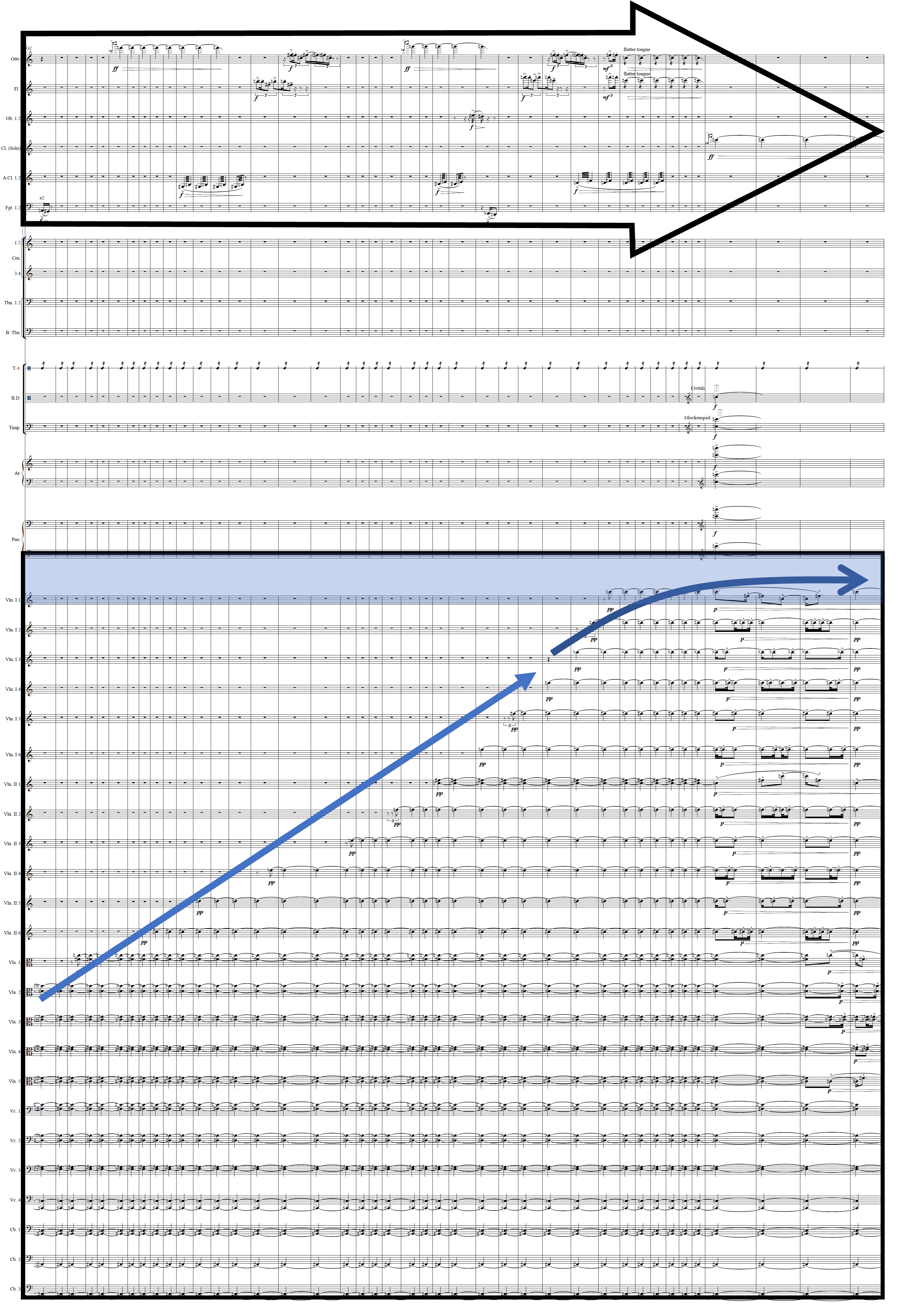 Part of the score of the Muography Symphony. The horizontal and vertical axes respectively show the time and velocity. The arrow-shaped upper and rectangular lower insets respectively show the meson’s inertial system at near light speed and the observer’s inertial system at rest. In the lower inset, the beginnings of the notes are delayed according to t ‘=t [1-v2/c2]-1, indicating that the meson decays slower as its speed increases. The shaded area indicates the relativistic region where the time delation asymptotically approaches to zero, meaning the mesons do not decay (the second arrow in the lower inset). In the upper inset, the mesons decay more frequently and periodically to generate muons. This piece expresses that multiple inertial systems exist in the relativistic world.

Far beyond our planetary system, where even light requires thousands of years to reach, particles accelerate and travel on a wayward path for millions of years without interaction until finally encountering the Earth’s atmosphere and metamophosizing into elementary particles called muons. Muons have been continuously precipitating from our atmosphere to the surface of our planet since the Earth was created 4.6 billion years ago, and even now, millions of muons are passing through our bodies. The penetration power of muons is strong enough to travel through volcanoes and pyramids. Similar to how radiography is used in hospitals to find a problem in our body with x-rays, muography is applied to eruption predictions and revealing the mystery of the pyramid by using muons. “The Muography Symphony” composed by Federico Iacobucci expresses a story from the muon’s generation to penetration. The moment at which a muon encounters the dynamic and scorching magma of a volcano is brief, only for one out of a million seconds because muons travel at a nearly the speed of light. Muons are precipitating universally and thus they travel into inaccessible regions of pyramids in Egypt, revealing a not-yet-discovered chamber. This whole story is expressed in the symphony. The principle of muography rests on Einstein’s relativistic theory and quantum physics, 2 ideas that revolutionized physics between the end of the 19th and the beginning of 20th century. Muography: the science and technology of the 21st century is built upon the relativistic theory and quantum physics in the last century. As a tribute to this link to the past, the Muography Symphony explores new sound dynamics of the 21st century while also employing the acoustic instruments of a traditional orchestra. “The Muography particle dance” composed by Thomas Howard Lichtenstein expresses the kinematics of high energy hadronic interactions in the atmosphere that generates multiple mesons that eventually decay into muons. These complicated and noisy interactions happen quickly, finishing within 1/100 million seconds, and typically the process is completed at a height of intercontinental flights. Subsequently, almost all of the muons land quietly without further particle productions. New time variant events are now unfolded in the universe and Earth, and these unfolded events can be expressed on a music score because music is also dynamic.