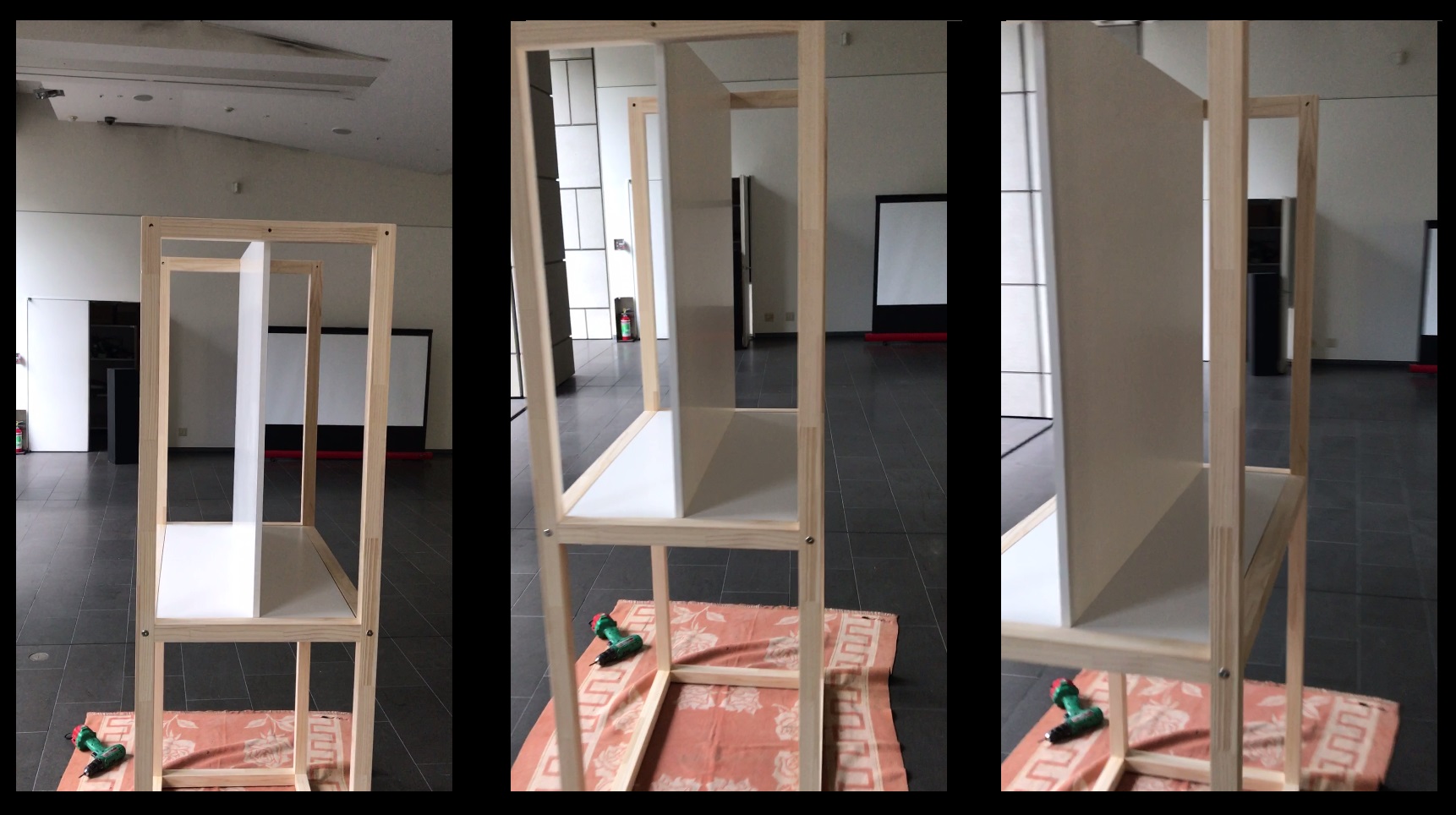 The poster size should not be larger than 1000 mm x 1000 mm to fit into the white part of the above wooden frame. The posters will be fixed to the frame with magnets. No tapes or pins are allowed to be used. The posters must be printed out and sent to the IIC prior to 29 November.

We launched the Muography Art Project in April 2017. Our organization is a group of researchers and students of Kansai University, researchers of Tokyo university, artists of Tama Art University, and various other artists. Our aim is to make ordinary people understand muography correctly through art. The motif is the scientific data obtained from Prof. Tanaka’s Muography research at the University of Tokyo, with the ultimate aim of creating a new genre of artistic expression and transmitting information on Muography to the public. In our project, we are fusing three dimensional computer graphics (3D-CG), sound installations, and the 3D reverse perspective illusion. Furthermore, our art is diverse ? including oil painting, watercolor painting, ceramics, calligraphy, Kyo Kanoko squeeze, cookie art, dimple art, etc. So far, we have held exhibitions twelve times in Osaka, Tokyo (Tama), Okayama, and Kobe from September 2017 to now. Our next exhibition will be held from December 3, 2018 to January 12, 2019 at the Kansai University Museum with a theme of “Gifts from outer space”

Scoria cone is known as the simplest and the most common type of volcanos. Although its formation mechanism is well known, it is difficult to measure its density structure because of its large volume. A group in Kyushu university started a muography project to reveal the internal density structure of a typical scoria cone, Komezuka in Mt. Aso. We constructed a remote-controllable detector system for the project. It consists of 144 plastic scintillators with silicon photomultipliers (SiPMs) attached at both ends. Readout modules developed in high energy physics field are used for SiPM signals. We also developed a monitoring system to record environmental information such as temperature, humidity and atmospheric pressure. Details of the system and the progress of the project will be presented.

We have developed a simulation system of muography based on PHITS + PARMA model. The simulation system is made for estimation of measurement time and investigation of degradation of infrastructure buildings. The system reproduces experimental cosmic-ray muon distribution and appropriate muography image could be calculated for a simple geometry. The image and structure of the simulation system will be presented.

Application of muography to monitor density distribution in oil reservoir

Oil recovery rate is as low as about 20 to 40%, and regeneration of declining oil fields is requested. A new oil well is needed for oil recovery that remains in subsurface, but the spatial resolution of the density distribution by the conventional methods is not necessarily high enough to make a decision on the position of the oil production well. Therefore, using elementary particle muons contained in cosmic rays, we clarify the possibility of monitoring the density distribution of petroleum reservoirs. The overall flow of the research process consists of three parts: first we quantitatively investigate the trade-off relationship between time resolution, spatial resolution, detectability and accuracy of muon exploration, and then based on the results we select several specific oil production scenarios, and then conduct theoretical simulations for muon observations according to each production scenario. The present study provides some simulation results of theoretical muon observation for some simplified models.

Development of a compact Muography system based on scintillator-SiPM detectors

Aiming for application of Muography technique to exploration of resources in the solar system or underground, ultra-compact Muography system is under development in collaboration with School of Engineering and Earthquake Research Institute in the University of Tokyo. The Muography system will consists of two sets of 64 channel plastic scintillator coupled to SiPM (MPPC) arrays with parallel readout electronics for timing and energy measurement. The progress of detector development will be presented.

SAKURAJIMA Report: Gift for Unborn Generations as from the Volcano Muography Project

A volcano captured at 4:48 p.m. on 13 October 2018 and installation of the MWPC-based Muography Observation System will be pinned-up.

Application of nuclear emulsion for muography

Nuclear emulsion is a photographic film that have sensitivity for charged particles. We have deployed films to various places by advantages that nuclear emulsion detectors are a compact device and need not to supply electronic power. We will present about observation performance and its application using nuclear emulsion for muography.

It turns out that our mere existence is nothing but a near miss. Matter-Anti -Matter looks back 14 billion years, at a time shortly after the Big Bang. A t that time, matter was created but also antimatter; not a tiny amount of it , but just 0.00000001% less than matter. Shortly after their creation, matte r and antimatter collided again, annihilated, and disintegrated into pure ra diation. If it wouldn’t have been for the 0.00000001% more matter, our universe as we know it, would have been filled with radiation and nothing else. No galaxies, no stars, no planets, no life. But nature decided to allow a small violation in the perfect symmetry of matter and antimatter. And this petty excess of matter is what our whole universe is made of. I come from the documentary tradition in which personal access and the authentic moment of capture is central. My work is always a move from distance to intimacy and back. I try to capture not only the object but evoke a sense of wonder and mystery. My artwork tries to show excitement for the detail and the cross link of the overall geometry.

Exploring the latent appearance in the world with leaf-stamp painting

The purpose of this project is to construct the quest in the painting world to express the latent appearance in the actual world which is a common item of muography and art. It is a work that expresses muography, like a leaf that has been watermarked on the sun, a work produced by exposing metal leaves on a transparent body and that exposed to light and projects the inside of the object that does not appear in front of eyes. Furthermore, by making this work a large spherical structure so that people can insert their head into the sphere, the state of light that penetrates from inside and outside the location can be experienced, and thus our image of muography is further stimulated. In this way, by revealing the concept of watermarking by the art expressions of imagination and cognition beyond our five senses, I reconsidered the searching intention to express the latent appearance in the world.